Bastrop Co. Residents Must Speak Out 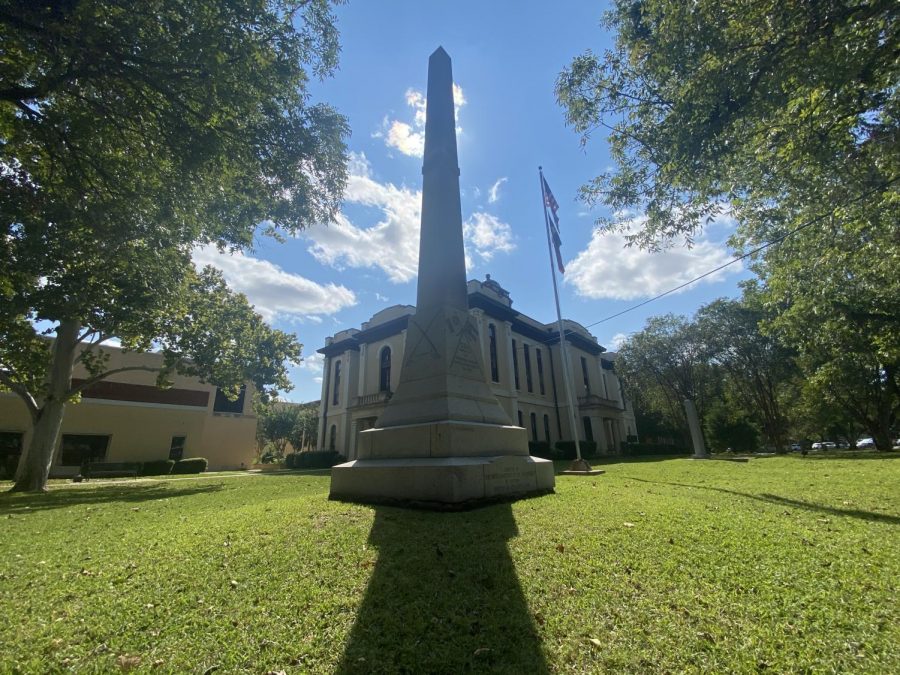 Towering over the courthouse lawn, the monument dedicated to the Confederate States of America and its soldiers has been brought into question by many members of the community.

After a year of fundraising and grassroots campaigning, the monument relocation committee founded by the Bastrop County Commissioners Court has faced another obstacle in moving the two monuments commemorating the Confederate States of America and its soldiers on the county courthouse’s lawn.

After the Commissioners Court approved the relocation of the monuments in a 3-2 vote, with commissioners Donna Snowden and Mark Meuth dissenting, local activist and politician Cheryl Lee paved the way for relocation. Lee, widely involved in grassroots campaigns in Austin and Bastrop, noticed the two Confederate monuments at a rally for Rodney Reed. “I’ve seen those structures, I just never paid attention to what they were,” said Lee. “The minute I saw them, I said I’m taking those down in 2020.”

The larger of the two monuments is an obelisk dedicated to the soldiers of Bastrop County who fought on behalf of the Confederacy. The second and much smaller monument commemorates the life and service of Joseph D. Sayers of Bastrop, who served as the Governor of Texas and as a major general in the Confederate Army. The monuments were erected in 1910 and 1963 respectively.

After the Commissioners Court approved the relocation, Lee and her committee gathered to raise the funds and find a new location for the monuments. “Right now, we’re waiting on the Texas Historical Commission, because the monuments sit on courthouse grounds,” said Lee. The Historical Commission has made it clear to the county government and Lee that they would prefer to see both of the monuments placed in a museum with proper context. However, Bastrop County does not have a museum large enough to house the larger obelisk monument. “We’re kind of playing this tennis match with THC right now, because they aren’t happy with the new location, and we’re trying to accommodate them,” said Lee.

Wolfe recommended a series of 12 guidelines that the THC should consider when faced with a permit for removal. The list includes questions of architectural significance, the original intention of the monument’s installation, and objections to the content or language of the monuments. “These guidelines are not in priority order,” wrote Wolfe. “The circumstances of each individual situation will guide the decision-making process.”

Bastrop County submitted a Historic Buildings and Structures Antiquities Permit, which has been reviewed by the Executive Committee of the Historical Commission. The next step is for the proposal to be heard by the entire Texas Historical Commission at their quarterly meeting on Oct. 28-29.