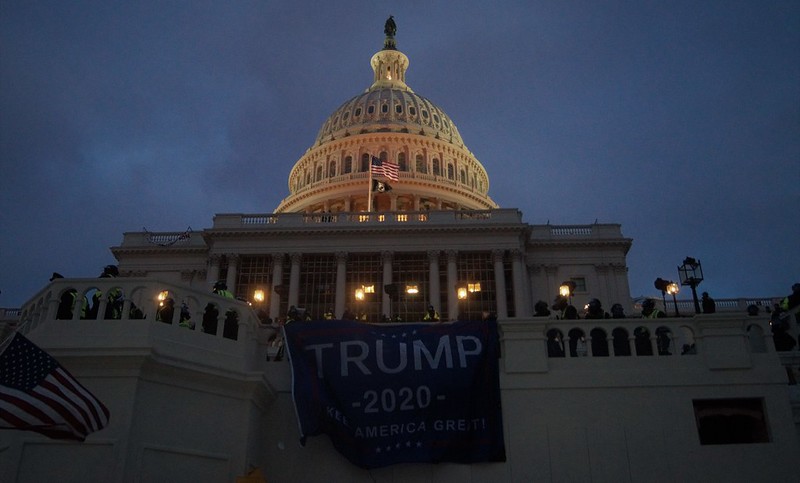 As the House and Senate convened in a special joint session of Congress to certify the election of then-President-elect Biden, hundreds, possibly even thousands, of pro-Trump supporters and QAnon Conspiracy Theorists pushed past Capitol Police and created a security threat for lawmakers.

After hundreds, possibly even thousands, of Trump supporters and QAnon conspiracy theorists invaded the US Capitol building in Washington, DC, strong, loaded words such as treason, sedition and insurrection, were spread by activists on social media and journalists in print and on-screen, to describe the events of Jan. 6.

While loaded language has been present in American political conversation since its inception, most of the words said by those reporting the news on January 6 and offering their opinion haven’t been heard in American vernacular since the Nixon Administration and it’s  Watergate Scandal. Words like “treason,” “sedition,” and “insurrection,” have all been used extensively since the events of Jan. 6.

Before rioters overtook the US Capitol, former President Donald Trump and some of his closest advisors spoke to the crowd on the White House lawn. The speeches by the president, his personal lawyer, Rudy Giuliani, and his son, Donald Trump Jr., all stoked the flame of an already fervid crowd. “We’re going to walk down to the Capitol, and we’re going to cheer on our brave senators, and congressmen and women,” said Trump. “But we’re going to try and give our Republicans, the weak ones because the strong ones don’t need any of our help, we’re going to try and give them the kind of pride and boldness that they need to take back our country.”

After the House and the Senate reconvened, members of both chambers claimed the former president’s actions qualified as sedition. “The mob was fed lies. They were provoked by the president and other powerful people,” said then-Senate Majority Leader Mitch McConnell, R-Ky.

As legislators from across our nation convened to certify the electoral vote of the 2020 Presidential Election, a large mob formed on Capitol Hill. Members of the crowd pushed towards the doors of the Capitol building in hopes of pushing past police and threatening high-ranking government officials Vice President Mike Pence and Senate Majority Leader Mitch McConnell to stand up and state the Electoral Vote in many swing states was illegitimate, undermining President-elect Joe Biden’s victory. Photos of the invasion show pro-Trump rioters sitting at the dais in the House of Representatives Chamber. The rioters entered the Capitol for the sole purpose of disrupting and stalling the confirmation of then-President-elect Biden. Political analysts and politicians alike debate whether or not those who entered the Capitol had other intentions.

Since Jan. 6, many changes have occurred to the American political scene. Jan. 11, five days after the violence at the Capitol, the House of Representatives filed Articles of Impeachment. “The fact is that the President of the United States committed an act of incitement of insurrection,” said Speaker of the House Nancy Pelosi, D-Calif. On Jan. 13, the House voted to impeach former President Trump 232 to 197. As of Jan. 21, it is unknown if the Senate will hear the impeachment trial.

Joe Biden and Kamala Harris were sworn in as president and vice president, respectively, marking the end of the Trump Administration. Shortly after being sworn in, President Biden signed 17 executive orders, most of which reversed Trump’s policies. One of the executive orders created a 100-day mask mandate in all federal buildings, and others placed the United States back into the World Health Organization and the Paris Climate Accord.