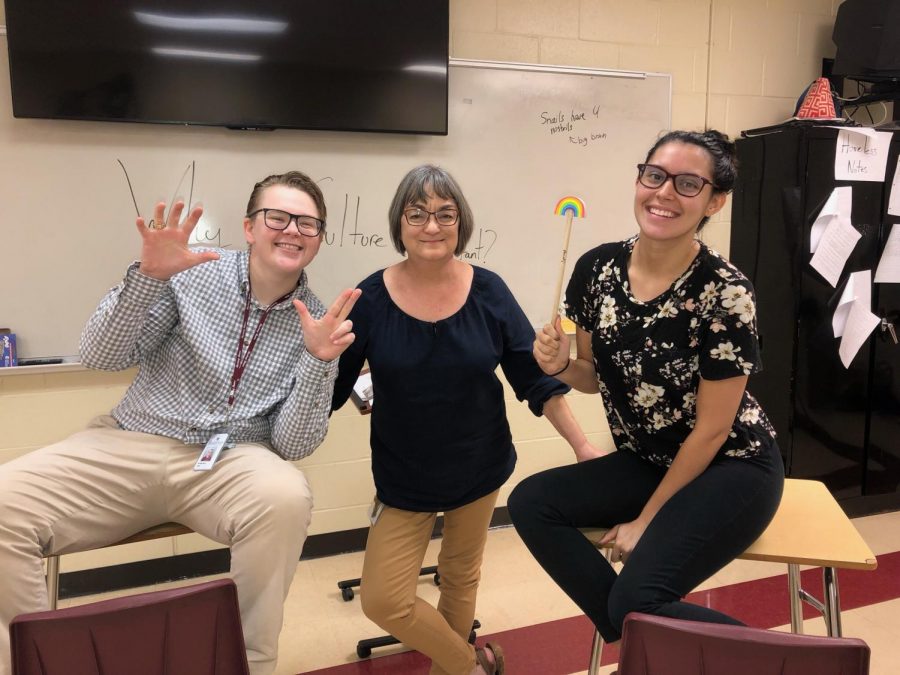 Gay-Straight Alliance Clubs, or GSAs for short, are student-run organizations that bring together LGBTQ students and allies to build unity and organize issues surrounding their school and community. “It’s important for kids to know who they are, and to accept who they are,” said senior Holly Wilke. “a lot of kids don’t have the opportunity to learn at home, … so having a GSA club is a really good way to find other people who you can relate to and learn from and spend time with.” GSA members openly discuss topics related to the gay community with sponsors. “Sometimes we’ll talk about coming out stories, other times we’re … sharing experiences,” said Wilke. “A lot of sharing, a lot of talking, and a lot of goofing around. It’s really relaxed.”

Teachers and administration have taken kindly to the new student organization on campus. “The administration is extremely supportive of this club,” said social studies teacher and GSA Sponsor Grace Springs. The Gay-Straight Alliance club is a safe space for LGBTQ students and allies to discuss what they experience in their day-to-day life.

“It helps LGBT kids off the bat,” said Springs. “They’re automatically less likely to hurt themselves or commit suicide, which matters.” According to the Trevor Project, a non-profit organization focusing on LGBTQ youth suicide, “LGBT youth seriously contemplate suicide at three times the rate of heterosexual youth.”

“I think it has given [LGBTQ students and allies] a place to go,” said Springs. “I’ll have kids that I don’t have in [a] class coming by my classroom, and saying hi and they’re happy to be in school, because they’re like ‘oh, I know so-and-so understands. I can talk to them about what I’m going through.’ I think it gives a little hope, it gives you a place to go, and be safe, and people on campus that you can talk to.”

The overall mission of the Gay-Straight Alliance nationwide is empowering LGBTQ students and allies to educate their school and community with youth-led groups. “I hope it helps a lot of kids feel more comfortable in their own skin, maybe raise a little awareness about ‘we’re all human,’ and our catchphrase ‘y’all means all,’” said Wilke. Understanding and empathy create a warm and open environment for individuals at the most basic human level. As in Maslow’s Hierarchy of Needs, the GSA offers safety, belongingness, and love, which are at the base of Maslow’s pyramid. This helps grow an individual to self-actualization and thus academic achievement grows.

“What I want people to know is it’s not just gay kids,” said Springs. “It’s for everybody. Gay-Straight Alliance: you can’t have a Gay-Straight Alliance without straight kids too. Showing up, and being a part of GSA says absolutely nothing about your sexuality, it says absolutely nothing about your gender, the only thing it says about you is that you’re supportive of your fellow classmates.”

GSA discusses LGBTQ issues at Bastrop High and in our community, every Thursday morning at 8 o’clock in Room 106 to support LGBTQ students and allies.